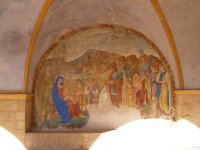 An art patron from Provence gave him as well as the painters Dufrénoy and Lombard the chance to achieve their first fresco in the narthex of the Saint Pancrace chapel in the Castel of Pradines, in Grambois-Vaucluse.

In 1927, he participated together with other artists in the decoration of Cafe de la Coupole (Montparnasse) where he painted on a pillar .

In 1930, he was asked to represent Law, Letters, Medicine et Sciences symbolically, on double canvass on the walls of Poitiers University Concil. This decoration will be presented to the Orangerie (Orangery) making of Girieud the first alive painter exposing in this place. The set was inaugurated in 1933 (2).
These paintings had disappeared. They were rediscovered one day, accidentally, in 1991 by Mister Yves-Bernard Brissaud, teacher in the Faculty of law of Poitiers, in the attic of this Faculty. They were then restored from 2002 by Mr Benoît Dagron then put back in place on September 15th, 2004 in the council room named René Savatier. (informations of an article of Poitiers Academy and from Mr Brissaud).

In 1932, he decorated the walls of a Roman chapel converted into a private house in Puyvert in Lourmarin-Vaucluse ( Noces de Bacchus et Ariane (wedding of Bacchus and Ariadne), Eurydice aux Champs Elysées (Eurydice to the Elysian fields), Le Couronnement de Psyché(Coronation of Psyche). ).

In 1936, he taught art of fresco at the Fine Arts School in Cairo Egypt and decorated a wall of this school of Fine Art. (3) (4)

In 1937 and 1942, he realizes two decorations today disappeared for a nursery school (5) and the City hall of Ivry. Concerning this last fresco, Girieud in the head of a team of twelve artists, won a competition organized by the Commissionership in the unemployment to the decoration of hall of Ivry. His team consisted of Misses de Andréis and Simonot and Messrs.Boulainghier, Chenu-Tournier, Chesneau, Dewé, Maxime Girieud, Kresser-Desportes, Lanos, Poly, R.C. Prior and Poupart. The surface to be decorated made 300m2 with a panel of 145m2. Will be represented : sports, family, joys of the river, gardens, music and danse, visual art and drama et sciences and natural sciences .

Pierre Girieud contributed to the revival of fresco, an art that had almost disappeared at that time. He published a treatise in which he modernised that technique, and gave advice insisting on the basic principles to be followed. An article written during his retrospective illustrates the place of decoration and fresco in its journey. (5)